Grand Saline, Texas, a town east of Dallas, has a history of racism, a history the community doesn’t talk about. This shroud of secrecy ended when Charles 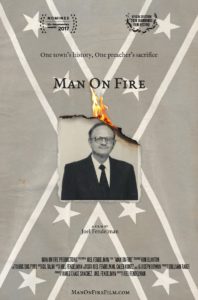 Moore, an elderly white preacher, self-immolated to protest the town’s racism in 2014, shining a spotlight on the town’s dark past. MAN ON FIRE untangles the pieces of this protest and questions the racism in Grand Saline today. Overall, MAN ON FIRE encapsulates the racial climate in Grand Saline and chronicles Moore’s life and death, presenting Grand Saline and Moore as two pillars of the film’s narrative: one a disjointed man seeking truth and communal repentance and the other a community whose present is inextricably tied to their past. MAN ON FIRE was Joel

Fendelman’s thesis film for the completion of his MFA program at the University of Texas in Austin. The film went into production late May of 2016 and was completed late May of 2017. The crew took seven trips to the Van Zandt County area to film and compile interviews as well as a weekend of filming in Austin and one in Dallas. The recreations were filmed over three days in Austin, Texas. Director Joel Fendelman joins us to talk about what led Reverend Charles Moore to commit such a radical act, his approach to telling this timely story and MAN ON FIRE’s upcoming debut at the 2018 Slamdance Film Festival.

For news and updates go to: manonfirefilm.com