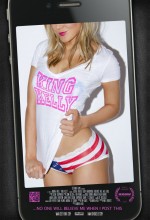 King Kelly (LOUISA KRAUSE) is an aspiring Internet star who performs webcam stripteases. When Kelly’s car – filled with illegal narcotics that she must deliver – is stolen by her bitter ex-boyfriend Ryan (WILL BRILL) on the 4th of July, Kelly and her best friend Jordan (LIBBY WOODBRIDGE) embark on an epic whirlwind of drugs, sex, violence, and mischief-making as Kelly tries to reclaim what is hers. Kelly’s biggest online fan, a wayward State Trooper (RODERICK HILL), joins the journey as the night spirals into chaos. Made entirely from camera-phone footage, King Kelly is a sensational journey through hedonistic American youth culture and the YouTube generation. Director Andrew Neel (Alice Neel, The Feature and New World Order) stops by to talk about this South by Southwest Film Festival favorite and wild ride through a changing American landscape.

“A ferocious indictment of Generation Me.” – IndieWIRE

“Neel has hit upon a compelling reason for the found-footage gimmick: to indict a narcissistic generation who think their phones make them royalty.” – Matt Singer, Time Out New York