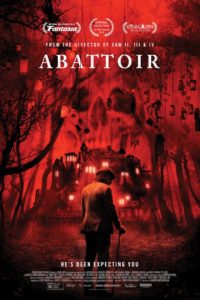 An investigative reporter works to solve the mystery behind a mysterious man who has been buying houses where tragedies have occurred. Set in a world where it always feels like night, even in daylight hours, real estate reporter Julia Talben’s (Jessica Lowndes) life is turned upside down when her family is brutally murdered. It is believed to be an open and close case, but Julia quickly realizes there is much more to this story when she returns to the crime scene to find the murder room deconstructed and physically removed from her sister’s home. This ignites an investigative pursuit that eventually leads her and ex-lover Detective Declan Grady (Joe Anderson) to the town of New English where they find the enigmatic Jebediah Crone and the Abattoir – a monstrous house stitched together with unending rooms of death and the damned. Julia comes to realize that her sister’s soul is trapped inside, but the Abattoir isn’t just a house – it’s a door to something more evil than anyone could have ever imagined. Julia and Grady are ultimately faced with the question: How do you build a haunted house? One room at a time. Director Darren Lynn Bousman (Repo! The Genetic Opera, Saw II, Saw III) joins us to talk about this sophisticated and complex cross genre story.

For News and updates go to: abattoir.info

“an unwieldy property, coming with its assembly work exposed, but “what a magnificent structure” it turns out to be. Prepare to get lost in its multi-levelled madness, & to have your familiarity with horror’s ever-revenant tropes deconstructed.” – Little White Lies

“Bousman might not quite pull off the ‘Howard Hawks meets The Wicker Man’ vibe he’s going for, but Abattoir is horror for grown-ups” – Cinevue

“While Bousman’s climax is a not terribly original effects-laden haunted house, the house’s builder, and his motives, have enough of their own flavor to please a hardened horror fan.” – Hollywood Reporter