Joe’s Violin – During a drive to donate musical instruments to public schools, 91-year-old Holocaust survivor Joseph Feingold offers his beloved violin, which he has played for more than 70 years. The instrument goes to the Bronx Global Learning Institute for Girls, where young musician Brianna Perez is inspired to become friends with her benefactor. Joining us will be Director Kahane Cooperman to talk about this beautifully told story about survival, and the ties that bind us together. 2017 Academy Award nomination for Best Documentary Short Film.

For news and updates go to: joesviolin.com/

Pear Cider and Cigarettes – Hard-living Techno Stypes has been Robert’s best friend since childhood, and over the years, Robert has been amazed by Techno’s ability to sabotage himself. When Techno is hospitalized in China and needs a liver transplant, Robert goes on a wild ride to get him home to Vancouver. Director(s) Robert Valley and Cara Speller stop to discuss the creative process and determination behind their visually striking vision of friendship and heartbreak. 2017 Academy Award nomination for Best Animated Short Film.

For news and updates go to: pearciderandcigarettes.com 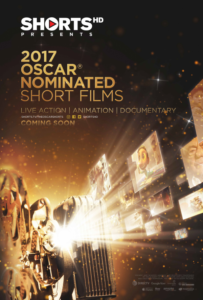 This marks the 12th consecutive year of the Oscar® nominated short films theatrical experience and is the only opportunity for audiences to watch the nominated short films prior to the 89th Academy Awards® ceremony on Sunday, February 26, 2017. “This year’s Oscar Nominated Shorts are formidable storytelling at its best,” said Carter Pilcher, CEO of ShortsHD, the TV network behind the annual theatrical compilations.  “Short films are exploding in popularity around the globe, and these Oscar® noms are the pinnacle—and ShortsHD’s theatrical release is the only way to see this year’s Live Action, Animation and Documentary shorts nominees on the big screen, a delight for movie fans the world over.”  ShortsHD™ is the first high definition channel dedicated to short movies and is available on DIRECTV (Channel 573), and AT&T U-Verse (Channel 1789), CenturyLink Prism TV (1789), Verizon Fios TV, Frontier Communications (Channel 1789), Google Fiber.  ShortsHD™ is operated by Shorts International, the world’s leading short movie entertainment company with the world’s largest movie catalogue dedicated to short movies. Shorts™ is the short movie on-demand service available on iTunes movie stores in 54 countries across the globe and Amazon Instant Video. The company is headquartered in London, England with an additional office in Los Angeles and is led by Carter Pilcher, Chief Executive. Find them on Facebook: facebook.com/shortshd and twitter: twitter.com/shortshd.For a sneak peak at The Oscar® Nominated Short Films 2017 program, please visit: http://shorts.tv/theoscarshorts/