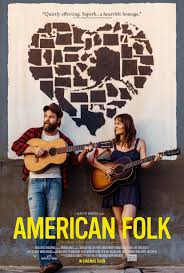 AMERICAN FOLK tells the story of two strangers grounded on the morning of September 11, 2001. Elliott (Joe Purdy) and Joni (Amber Rubarth) are unexpectedly thrust together amidst the chaos of that historic day. With little in common but both needing to get to NYC urgently, they accept help from Joni’s family friend Scottie (Krisha Fairchild) who lends the duo a rusty old 1972 Chevy Van. The shock and stress of 9/11 quickly threatens to derail their cross country journey until the pair discover what they do have in common: a love for old folk songs. Armed with a pile of guitars left in the van from Scottie’s

touring days, Elliott and Joni raise their voices together (and with those they meet on the road), re-discovering the healing nature of music and bearing witness to a nation of people who, even while mourning, manage to lift each other up in the wake of tragedy. With a refreshing gentleness and beauty, AMERICAN FOLK lovingly chronicles the spaces between the suffering and fear, where music has the power to connect. Musicians Joe Purdy and Amber Rubarth give nuanced and thoughtful performances, with voices that are uplifting and achingly gorgeous. Filmed over 3,500 miles in 14 states, AMERICAN FOLK serves as a love letter to the natural beauty of America, to the style of music that has shepherded us through historically tough times and to the kindness of all of the “folk” that make America what it is. Director David Heinz and Cinematographer Devin Whetstone talk about the challenges of filming in cramped quarters, capturing the spirit of a surprisingly united people coping with a disintegrating civic society.

“The songs are lovely, and the first-time actors give performances that grow warmer as the film progresses.” – Katie Walsh, Los Angeles Times

“David Heinz’s excellent debut is an ardent plea for togetherness in a divided world. Aided by his leading actors, talented cinematographer, and ear-worm of a soundtrack, Joni and Elliott’s journey is a privilege to share.” – Chloe Walker, Film Inquiry

“A simple story, beautifully told, American Folk is a timely reminder of a dream not yet dead.” – Jennie Kermode, Eye for Film

“The actors are both accomplished folk musicians, so the music is amazing. The film is quiet and peaceful as they journey in a forced slow pace back to the epicenter.” – Bradley Gibson, Film Threat