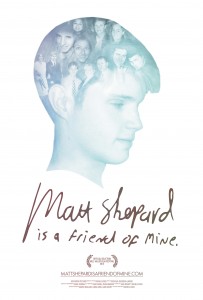 Just past midnight on October 12, 1998, Matt Shepard died from a vicious anti-gay attack at the hands of confessed homophobe Aaron McKinney and his accomplice Russell Henderson. Matt’s death opened the world’s eyes to the hate and inequality the LGBT community struggles against to this very day. Matt Shepard is a Friend of Mine is a powerful feature documentary about the gay young man who was tortured and murdered in one of the most notorious hate crimes in U.S. history. Directed by Michele Josue, a close friend of Shepard’s, the film revisits the shocking case with never-before-seen photos, rare video footage, and new revelations about Shepard’s all-too-brief life. Director / Producer Michele Josue and her husband, Producer Liam McNiff join us for a conversation on Matt’s life, Matt’s friends and the remarkable journey of his parents, Judy and Dennis Shepard.

For news and updates go to: mattshepardisafriendofmine.com

“Matt Shepard Is a Friend of Mine seeks to restore Shepard’s humanity to his name, to tell the story of the person who was murdered for being who he was. “ – John Darnielle, Slate

“The film is enough to prompt soul-searching among parents, educators and the LGBT community on how to provide adequate guidance and support for LGBT youths.” – Martin Tsai, Los Angeles Times

“This heartbreaking documentary should be shown in every high school and college – and everywhere intolerance is suspected.” Graham Fuller, New York Daily News

“This film doesn’t just revisit an atrocity, it moves through it, and finds meaning in it.” – Matt Zoller Seitz, RogerEbert.com