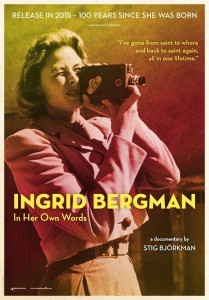 After a chance encounter with the daughter of Ingrid Bergman, Isabella Rossellini, director, screewriter Stig Bjorkman was she presented with a proposition: ”Shall we make a film about ‘mama’?” After gaining access to Bergman’s rich posthumous work – diaries, letters, photographs, amateur movies – Bjorkman appreciation of Ingrid Bergman as a strong and most determined artist grew. Through never-before-seen private footage, notes, letters, diaries and interviews with her children, INGRID BERGMAN – IN HER OWN WORDS presents a personal portrait and captivating look behind the scenes of the remarkable life of a young Swedish girl who became one of the most beloved and celebrated actresses of American cinema. Stig Björkman, is a writer, director and film critic. His previous films about cinema include BUT FILM IS MY MISTRESS (2010) and TRANCEFORMER – A PORTRAIT OF LARS VON TRIER (1997). As a writer he has published interview books with Ingmar Bergman, Woody Allen and Joyce Carol Oates among others. Between 1964 and 1972 he worked as chief editor for the Swedish film magazine Chaplin and has, over the years, contributed to Cahiers du Cinéma and Sight & Sound. Bjorkman joins us for a conversation on the life and times of a complex and supremely talented artist.

For news and updates go to: Ingrid Bergman: Her Own Words

“A rich, generous-spirited portrait of a woman who, in her unapologetic pursuit of art, fame and personal growth, was far ahead of her time..” – Ann Hornaday, Washington Post

“Bjorkman leaves behind the image of a uniquely strong, independent woman whose relaxed modernity was way ahead of its time.” – Deborah Young, Hollywood Reporter

“The exceptional home movies, many shot by Bergman herself, are an unending source of pleasure, visually reinforcing her children’s warm-hearted reminiscences: Their mother was fun to be around.” – Jay Weissberg, Variety