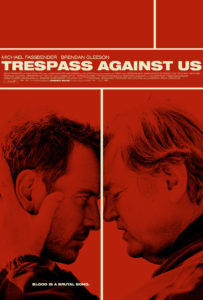 TRESPASS AGAINST US is set across three generations of the Cutler family who live as outlaws in their own anarchic corner of Britain’s richest countryside. Chad Cutler (Michael Fassbender) is heir apparent to his bruising criminal father, Colby (Brendan Gleeson) and has been groomed to spend his life hunting, thieving and tormenting the police. But with his own son, Tyson (Georgie Smith) coming of age, Chad soon finds himself locked in a battle with his father for the future of his young family. When Colby learns of Chad’s dreams for another life he sets out to tie his son and grandson into the archaic order that has bound the Cutler family for generations. He engineers a spectacular piece of criminal business involving a heist, a high-speed car chase and a manhunt, which leaves Chad bruised and bloodied and with his very freedom at stake. With the law cracking down and his father tightening his grip, Chad is forced into increasingly desperate measures. Featuring incredible performances – and an astonishing score by The Chemical Brothers – TRESPASS AGAINST US is at once an exhilarating crime thriller and a profoundly moving story about love and family. TRESPASS AGAINST US director ADAM SMITH (Director) is an award-winning film, television drama, documentary and music-video director. Smith is best known for his long-term collaboration with the Chemical Brothers, and the critically acclaimed concert film Chemical Brothers: Don’t Think he directed.  Director Adam Smith joins us to talk about his feature film debut and the riveting performances turned in by his three lead performers.

For news and updates go to: trespass-against-us

“Even when Trespass Against Us slumps toward the same generational conflicts at the heart of so many recent indies, these actors refuse to reduce their characters into any recognizable archetypes.” – David Ehrlich, IndieWire

“Dynamic storytelling and powerful performances bring out the pathos in an unusual tale of conflicting loyalties set on the criminal edges of a traveling community.” – Screen International

“At this point we should just accept that Michael Fassbender can play anything. In Trespass Against Us, he turns up his charisma and blunts his native intelligence, and the mixture works remarkably well.” – Norman Wilner, NOW Toronto

“It all boils down to the complicated relationships of fathers and sons, but with some riveting action and heart-tugging drama, Trespass Against Us ends up as thrilling must-see.” – Peter Turner, Starburst