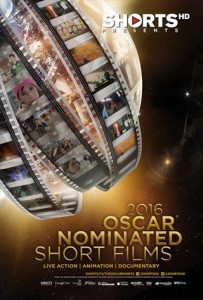 Since founding Shorts International in 2000, Carter Pilcher has worked to make his company the world’s leading short movie entertainment company. Shorts International has become the first choice distributor, broadcaster and producer for hundreds of films. Carter has extensive experience in short movie production and short movie entertainment. He is a voting member of the British Academy of Film and Television Arts and a member of the Short Film and Feature Animation Branch of The US Academy of Motion Pictures, Arts and Sciences (AMPAS) – the guys who pick the Oscars. Carter talks to us about the fifteen wonderful films nominated for the Live Action, Documentary and Animated Short Film 2016 Academy Awards.