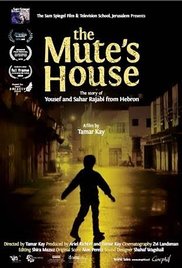 Eight-year-old Yousef and his deaf mother Sahar are the last Palestinian residents of an otherwise deserted building in the Israeli part of the city of Hebron. Their island within the Jewish quarter is called “The Mute’s House” by Israeli soldiers, even though Sahar isn’t mute at all. Travel agencies have included the property in their tours. Yousef makes good use of his privilege to cross the border when he goes to school. Through the tour guides’ explanations, we learn the story of Yousef and Sahar, who bravely withstand all the threats and bullying. None of Yousef’s Palestinian classmates can come to his house, and filmmaker Tamar Kay isn’t allowed to cross the border to film the Palestinian quarter with Yousef. Despite his disability – Yousef was born with one arm – he amuses himself with the chickens, goats and rabbits that forage among the ruined neighboring houses, and he plays the guitar and video games. The Mute’s House is an intimate portrait that elegantly illustrates the absurdity of the endless conflict. Director Tamar Kay was born in Jerusalem and graduated The Jerusalem Sam Spiegel Film & Television School in 2015, stops by to talk about her moving and heartbreaking portrait of life on the edge of chaos and isolation.

“If someone wrote a fictional script for a film about this story, no one would believe it.” – Alan Berliner, (dir. Nobody’s Business, Emmy Award Winner)