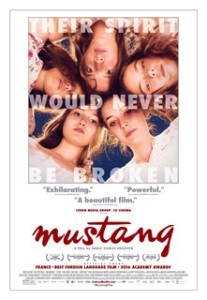 Based on the personal life of the film’s director Deniz Gamze Ergüven personal life Mustang tells the story of five free-spirited teenage sisters living in a village in Northern Turkey. As the sisters splash about on the beach with their male classmate their innocent fun a neighbor reports what she considers to be illicit behavior to the girls’ family.  The family overreacts, removing all “instruments of corruption,” like cell phones and computers, and essentially imprisoning the girls, subjecting them to endless lessons in housework in preparation for them to become brides.  As the eldest sisters are married off, the younger ones bond together to avoid the same fate.  The fierce love between them empowers them to rebel and chase a future where they can determine their own lives in Deniz Gamze Ergüven’s debut, a powerful portrait of female empowerment. Mustang was selected as the French entry for the Best Foreign Language Film at the 88th Academy Awards, making the December shortlist of nine films. The film was also nominated for a Golden Globe Award for Best Foreign Language Film. Director Ergüven’s joins us for a conversation on her beautifully rendered story of five young women who refuse to be shackled by a repressive social system.

For news and updates go to: mustang

“Part of a welcome international wave of films made by women directors that focus on girls growing up in worlds of men – and on what they look like when no one’s looking.” – Ty Burr, Boston Globe

“It’s a moving portrait of sisterhood, a celebration of a fierce femininity and a damning indictment of patriarchal systems that seek to destroy and control this spirit.” – Katie Walsh, LA Times

“’Mustang’ is the début feature of Deniz Gamze Ergüven, and it’s quite something: a coming-of-age fable mapped onto a prison break, at once dream-hazed and sharp-edged with suspense. – Anthony Lane, New Yorker