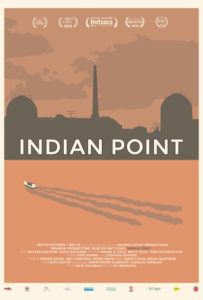 INDIAN POINT takes an unblinking look at the dramatic debate over nuclear power by going inside the aging plant that looms just 35 miles from New York City. With over 50 million people living in close proximity to the facility, it has stoked a great deal of controversy in the surrounding community, including a vocal anti-nuclear contingent concerned that the kind of disaster that happened at Japan’s Fukushima nuclear plant could happen here. At the same time, its continued operation has the support of the plant’s operators and the NRC (Nuclear Regulatory Commission) as they campaign to relicense Indian Point for another 20 years of operation. INDIAN POINT presents a complex story through the people who are most invested in the nuclear industry—the owners of the plant, the workers at the plant and the activists who want to shut it down. The debate at the center of INDIAN POINT is more timely now than ever. In February of 2016, news broke that the groundwater below Indian Point had been contaminated with radioactive material, prompting a state investigation.  Director and producer Ivy Meeropol takes full advantage of her unprecedented access to the plant at the center of the most contentious relicensing process in the history of the industry. Her even-handed approach to the history and issues surrounding nuclear energy in general and INDIAN POINT specifically makes the film compelling filmmaking and indispensable viewing for anyone who cares about our energy future.

For news and updates go to: firstrunfeatures.com/indianpoint

“See it if you want to lose sleep.” – Vulture

“A cautionary tale about a technology once seen as an abundant and non-polluting energy source, but with downsides that could make oil spills and electrical brownouts seem as minor as a fender bender.” – Lewis Beale, The Daily Beast

“A startling portrait.”– The Hollywood Reporter