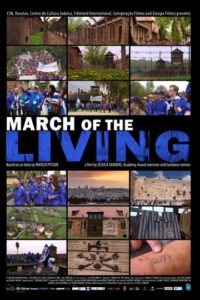 MARCH OF THE LIVING tells the story of the last generation of Holocaust survivors traveling to Poland with thousands of teenagers from around the world to revisit the sites of the Holocaust and retrace the Death March from Auschwitz to Birkenau, in a journey of remembrance. Filmed in Brazil, Germany, Poland, Israel and the US, the film tells the moving story of the survivors’ hope of passing down their history and memory of the Holocaust to the next generation. MARCH OF THE LIVING follows survivors and teens from Sao Paulo, Los Angeles and Berlin on an emotional journey as they confront the enormity of the past and the possibility of hope in a visit to Israel on its 60th anniversary. A contemporary and unique look at the Holocaust, the film features striking cinematography of the concentration camps today and images and artifacts never seen. MARCH OF THE LIVING raises questions about Holocaust memory as it relates to genocides worldwide today, and about what will happen when the remaining survivors, now in their 80’s and 90’s, will be gone. MARCH OF THE LIVING director and writer Jessica Sanders joins us to talk about the desire of Holocaust survivors to share their memories and the hope that the world will say once and for all never again to racism, indifference, anti-semitism and injustice.

For news and updates on Jessica Sanders go to: jessicasandersfilm.com

For news and updates on March of the Living go to: www.visitfilms.com

MARCH OF THE LIVING will be available on VOD  Tuesday, June 28, 2016 on iTunes and Amazon Prime