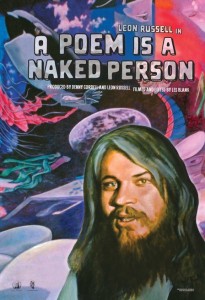 A POEM IS A NAKED PERSON – a glorious portrait of beloved singer-songwriter Leon Russell as filmed by documentarian Les Blank between 1972 and 1974. A fascinating time capsule filled with wall-to-wall music (including performances by legends such as Willie Nelson and George Jones, amongst many others), the film finally had its world premiere at this year’s SXSW Film Festival (with Russell in attendance), and will open theatrically in LA at Cinefamily on July 9, followed by a national release. An ineffable mix of unbridled joy and vérité realism,  A POEM IS A NAKED PERSON lets us into the world of Russell and his friends and fellow artists in and around his recording studio 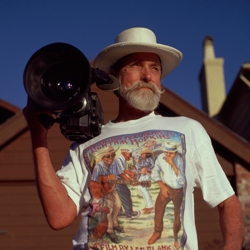 in northeast Oklahoma, capturing intimate, off-the-cuff moments and combining them with mesmerizing scenes of Russell and his band performing live. This singular film about an artist and his community never got an official theatrical release and has attained legendary status; now after more than forty years it can finally be seen and heard in all its rough beauty. Executive Producer and the son of Director Les Blank, Harrod Blank joins us for an intimate look at the making of this classic documentary and the journey he took to bring his dad’s lost masterpiece back from the dead.

For news and updates go to: lesblank.com

“One of the great AWOL music docs. An intimate look at a Seventies star in action. It’s finally getting a theatrical run over 40 years after the fact; do not let this minor miracle pass you by.”  – David Fear, Rolling Stone

“A poetic exploration of a moment, a place and an artist.” – A. O. Scott, New York Times

“One of the greatest rock documentaries I’ve ever seen, as eloquent an evocation of the reality-distortion field around rock stars as D.A. Pennebaker’s Don’t Look Back or Robert Frank’s Cocksucker Blues, but funnier and stranger than either.” – Alex Pappademas, Grantland