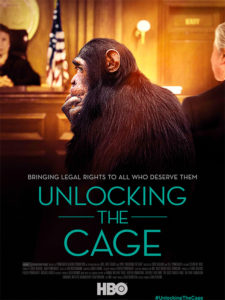 The latest documentary from the renowned filmmaking team of Chris Hegedus and D. A. Pennebaker (The War Room), UNLOCKING THE CAGE follows trailblazing animal rights lawyer Steven Wise in his challenge to break down the legal wall that separates animals from humans. UNLOCKING THE CAGE premiered at the 2016 Sundance Film Festival. Given that the Supreme Court has ruled that corporations are people, why not chimps? Attorney Steven Wise and his legal team, the Nonhuman Rights Project, are making history by filing the first lawsuits that seek to transform an animal from a “thing” with no rights to a “person” with legal protections. Supported by affidavits from primatologists around the world, Wise maintains that, based on scientific evidence, cognitively complex animals such as chimpanzees, whales, dolphins and elephants have the capacity for limited personhood rights that would protect them from abuse. The filmmakers capture Wise’s progress: from the halls of academia to animal sanctuaries and zoos, and finally into the courtrooms where he makes a compelling case on behalf of four captive chimpanzees in New York State.  UNLOCKING THE CAGE captures a monumental shift in our culture, as the public and judicial system show increasing receptiveness to Wise’s impassioned arguments. It is a provocative and intimate look at a lawsuit that could forever transform our legal system, and one man’s lifelong quest to protect “nonhuman” animals. Among the most renowned and accomplished documentary filmmakers ever, co-directors Chris Hegedus and D. A. Pennebaker join us to talk about their latest groundbreaking film.

For news and updates go to: unlockingthecage

“Thoughtful, Compelling and Heroic. The film made me proud to be a primate.” – Jon Stewart

“In their new documentary, D A Pennebaker and Chris Hegedus bring their relaxed, acute observational style of filmmaking to bear on a thorny tangle of legal and philosophical questions. Observant and absorbing.” – A.O. Scott, The New York Times

“Engaging… makes a worthy case for reconsidering the sturdiness of laws that explicitly separate humans from animals. With legal-thriller pacing and emotional intelligence, it chronicles attorney Steven Wise’s gung-ho effort to get a U.S. court to recognize a chimpanzee as a legal person with protections, as opposed to a legal “thing” without rights.” – Robert Abele, Los Angeles Times

“A smart, heroic act of film-making. This compassionate and distinctive work is a combination of single-minded legal drama and humane consciousness raising possibilities. It is a story about something that is often very near to our hearts.” – Isa Freeling and Deborah Kane, The Huffington Post