A rainy night. A dazed and numb young cabdriver, Luz, drags herself into the 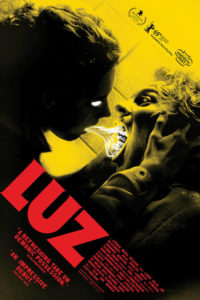 brightly lit entrance of a rundown police station. Across town in a nightspot, Nora seductively engages police psychiatrist Dr. Rossini in a conversation. Nora is possessed by a demonic entity, longing for the woman it loves – Luz. She tells the Doctor about her old schoolmate Luz’s rebellious past at a Chilean school for girls. Increasingly drunk on her story, Rossini turns into an easy prey in Nora’s hands, but he’s soon called away to the police station to examine Luz. Supervised by his colleagues, the doctor puts Luz in a state of hypnosis that initiates a series of flashbacks, unfolding the events leading to her arrival. But the entity that has taken control of the doctor wants something more. Bit by bit it slips into Luz’ reenactment and makes old memories come to light. Shooting entirely on 16mm, first time feature film director Tilman Singer pays homage to horror masters David Cronenberg, Dario Argento and Lucio Fulci, while infusing the genre with a fresh take of his own. Director Tilman Singer stops by to talk about his mind-bending, trip through a fevered tale of “demonic” possession, ruptured identity and menacing dread.

”LUZ is a story about identity, a lack of one, or maybe even denying one’s own. For the most part this is told by forces (archetypal characters, institutions, or personifications of moral arguments) influencing and manipulating our titular character Luz. I structured the narrative as a panic attack, of repressed memories

and confusion. It is purposely open to interpretation by the viewer. LUZ is a sensuous thriller that plays with the sensory perception of the audience. Initially, I wanted to write a simple story that could only be told audio-visually. How we ended up telling it cinematically, nested within diegetic flashbacks, got a little more complicated. For example, we use an additional layer of sound that adds a past reality to a present one. Given that we are observing a moment relived under hypnosis,  the credibility of both realities is questioned at all times. The viewer who attempts to answer this question of credibility has to, with sharpened senses, fully engage in image and sound.”

For news and updates go to: yellowveilpictures.com/luz

“A refreshing take on demonic possession in which the usual fright-flick cliches are nowhere to be found.” – John DeFore, Hollywood Reporter

“Though there’s a split in audiences around what constitutes horror … the one thing that’s agreed upon is that the genre seeks to unsettle and provoke. In this regard, Singer’s Luz is an undeniable triumph.” – Douglas Davidson, Elements of Madness