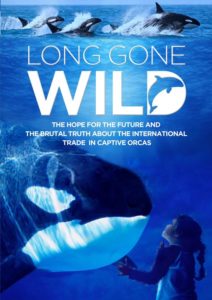 picking up where Gabriela Cowperthwaite’s acclaimed documentary BLACKFISH left off while telling a uniquely new and different story… LONG GONE WILD centers on five primary areas: (1) The Blackfish Effect (what it did and didn’t accomplish i.e., SeaWorld took a major hit to its bottom line, but the 20 orcas are still there); (2) The case against captivity (orcas are forced to live in barren concrete tanks); (3) Orcas as sentient animals (their great capacity to think, feel, communicate, and empathize); (4) The Whale Sanctuary Project and its model seaside sanctuary for retired orcas – providing a safe, permanent home in their natural habitat; and, (5) The ominous threat to orcas posed by Russia and China, triggered by the explosive growth of mega-aquariums in China. Director, producer and writer Bill Neal joins us for a conversation on the set-backs and steps being taken around the world to defend and enhance the lives of these magnificent mammals.

Director’s Statement: For decades, killer whales have been performing for sold-out audiences at aquatic theme parks like SeaWorld – and for nearly as long, there have been cries to “free the orcas.” To which park executives have answered with a simple question: Where will they go? A legitimate argument. Orcas held in captivity for much or all of their lives

are simply not equipped to deal with life in the wild. But all that is about to change, thanks to the “dream team” of scientists/orca experts/engineers with The Whale Sanctuary Project. Their mission: to establish a model seaside sanctuary where whales and dolphins can be rehabilitated or can live permanently in an environment that maximizes well-being and autonomy and is as close as possible to their natural habitat. We will document this ground-breaking effort through interviews with the key players along with exclusive footage of the proposed cold-water site, the most crucial piece of a very complex puzzle. In the end, it is all about restoring something we humans have taken from these highly intelligent, socially complex animals by forcing them to live in captivity for our entertainment and amusement. And by retiring them to a seaside sanctuary, we dignify not only the orcas but ourselves. – William Neal

For news, screenings and updates go to: longgonewild.com

“Long Gone Wild will prove to be just as damaging for SeaWorld and other marine aquariums as Blackfish was six years ago” – Danielle Solzman, Solzy at the Movies