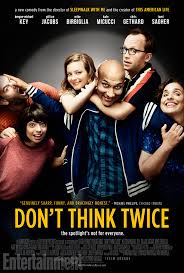 For eleven years, an improv group called The Commune has reigned as the big fish in the small pond of their New York improv theater. Commune members Miles, Samantha, Jack, Allison, Bill and Lindsay invent comedy without a script and without a net. They’re ingenious, they’re fast, and they build on each others’ ideas like best friends – which they also are. Night after night they kill onstage and wait for their big break. Day after day day they work menial jobs to support themselves. Then they get news that their theater is shutting down, and scouts from a hit TV show come to a performance, looking for talent. Only two cast members get the nod, upsetting the dynamic of the group and leaving its future in doubt. Relationships begin to crack as six best friends face the truth that not all of them will make it, and for some, it may be time to give up on the dream and move on. Funny, insightful and honest, DON’T THINK TWICE looks at a common experience that’s an uncommon subject for a film: failure. As he did in his acclaimed debut about a stand-up comedian, SLEEPWALK WITH ME, writer/director/actor Mike Birbiglia captures universal human experiences that happen in the lives of professionally funny people. With a top-flight ensemble of comic actors including Keegan-Michael Key, Gillian Jacobs, Kate 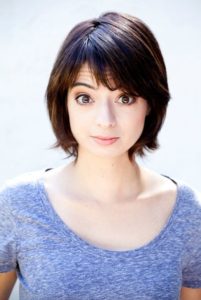 Micucci, Chris Gethard, Tami Sagher and Birbiglia, DON’T THINK TWICE tells a nuanced story of friendship, aspiration and the pain and promise of change. Co-star Kate Micucci joins us to talk about being a part of the summer’s breakout hit, doing improv, on stage and on screen. Kate Micucci, along with partner Riki Lindhome, make up the comedy duo Garfunkel and Oates. The two met at Upright Citizens Brigade theatre in Los Angeles in 2007 and named their group after the “two famous rock-and-roll second bananas” Art Garfunkel and John Oates. The duo, which regularly performs and tours across the country, were named one of the Top 10 Comics to Watch by Variety.

For news and updates go to: dontthinktwicemovie.com

“Don’t Think Twice is hilarious, yes, but it’s also thoughtful and sad and sweet. Birbiglia knows how to communicate those things, too.” – Sheila O’Malley, RogerEbert.com

“Don’t Think Twice,” which has a warm heart, could have been a much nastier movie. Yet its disappointed show-business hopefuls dreading their expiration dates make no bones about their insecurities.” – Stephen Holden, New York Times

“”Don’t Think Twice” really shines as an improv procedural, a film that celebrates, in illuminating detail, the skills and anxieties of this showbiz subgenre.” – Joe Morgenstern, Wall Street Journal

“Birbiglia continues to mine a scene he knows well, and even though he doesn’t strike you as a natural-born filmmaker (some of these scenes are as flatly lensed as the SNL sketches being spoofed), he’s evolving as a confrontational dramatist.” – Joshua Rothkopf, Time Out