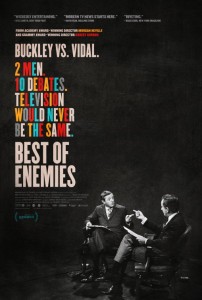 In the summer of 1968 television news changed forever. Dead last in the ratings, ABC hired two towering public intellectuals to debate each other during the Democratic and Republican national conventions. William F. Buckley Jr. was a leading light of the new conservative movement. A Democrat and cousin to Jackie Onassis, Gore Vidal was a leftist novelist and polemicist. Armed with deep-seated distrust and enmity, Vidal and Buckley believed each other’s political ideologies were dangerous for America. Like rounds in a heavyweight battle, they pummeled out policy and personal insult — their explosive exchanges devolving into vitriolic name-calling. Live and unscripted, they kept viewers riveted. Ratings for ABC News skyrocketed. And a new era in public discourse was born. Along with Co-director and co-producer, Robert Gordon and  Academy Award winner (20 feet from Stardom), Morgan Neville have put together a utterly fascinating and ultimately a prophetic look at a moment in television and political history that changed the way we talk about one another. Director Neville joins us for a conversation on the clash and crash of two defining American intellectuals.

For news and updates go to: magpictures.com/bestofenemies/

BEST OF ENEMIES opens in New York at IFC and Lincoln Plaza, and in Los Angeles at The Landmark on Friday, July 31st.

“Outstanding. There could scarcely be any documentary more enticing, scintillating and downright fascinating than Best of Enemies. Riveting both to those who have general memories of watching the broadcasts at the time and to younger political buffs who may never before have seen these titans of articulations and elocution in action.” – Todd McCarthy, The Hollywood Reporter

“Thoroughly engrossing and surprisingly entertaining. Both fascinating as a glimpse at the not-so-distant past and provocative as an account of what arguably was an early step in the decline of political discourse on television.” – Joe Leydon, Variety

“The best doc at Sundance. It rivetingly retraces how one heated rivalry sparked an entire culture of punditry.” – David Ehrlich, Time Out New York