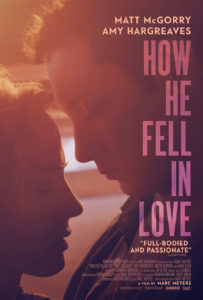 Travis (Matt McGorry), a young struggling musician, crosses paths with Ellen (Amy Hargreaves), an older married yoga teacher who is trying to adopt a child with her husband. Travis and Ellen begin an affair that slowly deepens into something more intimate and profound. As their encounters continue, Ellen is confronted with her failing marriage while Travis must face the consequences of his actions.  Written and directed by Marc Meyers (HARVEST) and stars Matt McGorry (Orange is the New Black), Amy Hargreaves (Homeland, BLUE RUIN), Britne Oldford (American Horror Story) and veteran film and theatre actor Mark Blum (Mozart in the Jungle). Director Marc Meyers joins us for a conversation on managing the responsibilities of writing, producing and directing his own unforgettably intimate film.

For news and updates go to: howhefellinlove.com

“How He Fell in Love is truly adult moviemaking that respects both carnality and commitment. It’s the type of mature drama that’s rarely seen in American movies.” – Bob Strauss, Los Angeles Daily News

“…the subtly wrought interior life  (Amy)Hargreaves instills her in character holds your gaze throughout.” – John Lopez, The Huffington Post

“… (Marc) Meyers has so grounded the narrative that it feels like a fresh unique take.” – Terence Johnson, Award Circuit

“…the real standout of this story is the five-star turn by the wonderful and heartbreaking Amy Hargreaves who lays barren equal parts love and hate, joy and sorrow in a brave performance that isn’t afraid to show the emotional turbulence and confusion of a woman of age…” Star Pulse