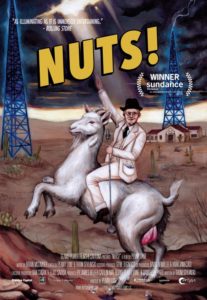 Inventive and wildly fun, NUTS! recounts the unbelievable true story of John Romulus Brinkley, a Kansas doctor who in 1917 discovered that he could cure impotence by transplanting goat testicles into men. From there, the story only gets more bizarre. Mixing hand-drawn animated reenactments, interviews, archival footage, and a very unreliable narrator, NUTS! traces Brinkley’s rise from poverty and obscurity to the heights of celebrity, wealth, and influence. Along the way, he transplants thousands of goat testicles, amasses an enormous fortune, is (sort of) elected Governor of Kansas, invents junk mail and the infomercial, builds the world’s most powerful radio station, and generally annoys the heck out of the establishment. Filmmaker Penny Lane has skillfully borrowed a page from her subject – charming viewers into believing the unbelievable, building their trust and excitement, until the final chapter bares the painful truth and reveals the doctor for what he truly was. NUTS! reminds us that our love of (and need for) compelling narratives is exactly what makes us so endlessly susceptible to being conned. Director Penny Lane stops by for a conversation on Brinkley, our collective need to believe in something and any contemporary parallels to be drawn from this bizarre story.

For news and updates go to: nutsthefilm.com

NUTS! had it’s World Premiere at the 2016 Sundance Film Festival and won the U.S. Documentary Special Jury Award for Editing.

“Mixing droll animation, stock footage and a restrained number of talking head interviews, the director Penny Lane’s biography has all the whimsy of a tall tale, until a late change in tone surprises with genuine emotion.Nuts! is really a kick.” – The Guardian

“Don’t let the synopsis fool you, there’s much more here than a simple movie about a guy who likes to put goat balls in people…[Lane] explores the peculiar and undeniably fascinating story of Brinkley in what is easily an early contender doc of the year…Nuts! is a film you’ll definitely want to check out.” – Film Pulse

“Penny Lane is a documentarian who blends the archival with the personal in powerfully emotive ways… [she] is now firmly ensconced as a leading voice among her documentary filmmaking peers. “ – Vimeo

“What won’t spoil the film is my spewing praise for Lane’s craft… Lane is the answer to a question more people should be asking: who’s the great documentarian of this generation?” – The Verge

“In keeping with a recent trend in documentary filmmaking, nontraditional, sometimes controversial storytelling techniques will be on full display, Mr. Cooper said. The director Penny Lane, for instance, uses animated re-enactments and “one seriously  unreliable narrator” to trace the “mostly true” story of a man who found success selling a goat-testicle impotence cure..” – New York Times