In Richard Miron’s surprising and empathetic FOR THE BIRDS, we follow an unusual 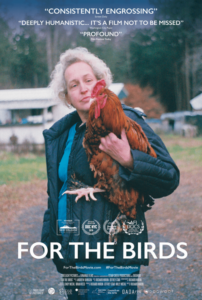 woman named Kathy who lives with 200 pet chickens, ducks, geese and turkeys. What starts as a story seemingly about Kathy’s battle with local animal advocacy groups slowly transforms into an intimate drama about her relationship with her husband Gary, and the toll the birds have taken on their marriage and her well-being. Filmed over the course of five years, this sensitive tale of one woman’s world breaking down—poignant and absorbing in equal measure—is ultimately one of

hope about the possibility of regaining one’s life. Director Richard Miron stops by to talk about winning the Murphy’s confidence and trust, following his filmmaker’s instinct to stay with a story with more than its share of twists and turns and crafting a compassionate portrait of beautifully flawed people.

For news and updates go to: forthebirdsdocumentary.com

For more about the filmmaker: richardmiron.com

FOR THE BIRDS – Q&A with Richard Miron (Director/Producer/Editor), Jeffrey Star (Producer/Editor), Holly Meehl (Producer) and Andrew Johnson (Composer) following the 7:40 pm show on Friday, 6/14 at the Monica Film Center. Filmmakers Richard and Jeffrey will also Q&A on Saturday after the prime show.