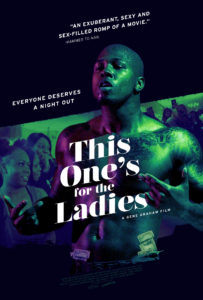 the chance to throw singles at the hottest dancers in New Jersey, The Nasty Boyz – featuring Satan, Mr. Capable, Fever, Young Rider and lesbian ‘dom’ dancer Blaze. THIS ONE’S FOR THE LADIES isn’t just about the tips or the dancing. It’s a heartwarming story of friendship and the resilience that comes from community. Hilarious, eye-opening, and breathtakingly sexy, THIS ONE’S FOR THE LADIES is a virtual how to guide for

letting go of your troubles and having a good time. Director Gene Graham (The Godfather of Disco) joins us to talk about the respect he has for all of the people, patrons and strippers, in his film, how the film Magic Mike and the lack of people of color in it “inspired” his nuanced, multi-layer response.

For news and updates go to: thisonesfortheladiesmovie.com

For more about the filmmaker go to: determinedpictures.com

“Showcases a vibrant and thriving community of dance shows and the people who enjoy them, and finds the humanity behind the G-strings.” – Jude Dry, Indiewire