Avant-garde Russian filmmaker Kirill Serebrennikov (The Student) returns to the 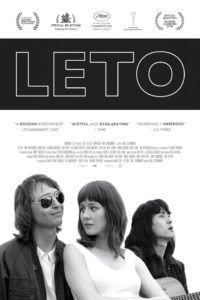 big-screen with a tribute to the early years of Russian rock with LETO. Leningrad, in the summer, early eighties. Smuggling LP’s by Lou Reed and David Bowie, the underground rock scene is boiling ahead of Perestroika. LETO tells the tale of Viktor Tsoi (Theo U) and the Kino group, about his relationship with Mike Naumenko (Roma the Beast), his wife Natalya (Irina Starshenbaum) and many who were in the vanguard of the rock movement Leningrad in 1981. This is a story about Leningrad of the 80s, about love, searching and high hopes – about a mood that will stay with us forever. LETO is full of music that the characters live and breathe: the Kino group,

Mike Naumenko, the cult tracks of that time. Mike and his beautiful wife Natasha meet with young Viktor Tsoï. Together with friends, they will change the trajectory of rock n’roll music in the Soviet Union. Co-writers Mikhail Idov and Lili Idova join us to talk about the  working with avant-garde Russian filmmaker Kirill Serebrennikov, celebrating a time of artistic freedom and indelible impression that these artists had on the people who connected to their enthusiasm.

For news and updates go to: twitter.com/michaelidov

“Weaving a glancing love triangle into a poignant observation on the waxing and waning of creativity, Serebrennikov revels in radiant black-and-white scenes of urban grit.” – Jeannette Catsoulis, New York Times

“Far from an angry political screed, it feels both removed from its fraught larger context and shrewdly, poignantly attuned to it.” – Justin Chang, Los Angeles Times

“Leto is a gorgeous, endlessly charming romance drama that’s part jukebox musical and part anthropological document. With revolution on the periphery, Leto is a superb picture.” – Joshua Brunsting, The CriterionCast

“There is a sprawling sense of time and place to Leto, which blows out the running to over two hours, yet there is not a frame of the film one would want to see excised.” – Simon Foster, Screen-Space