BEFORE STONEWALL tells the story of the 1969 the police raided the Stonewall Inn, 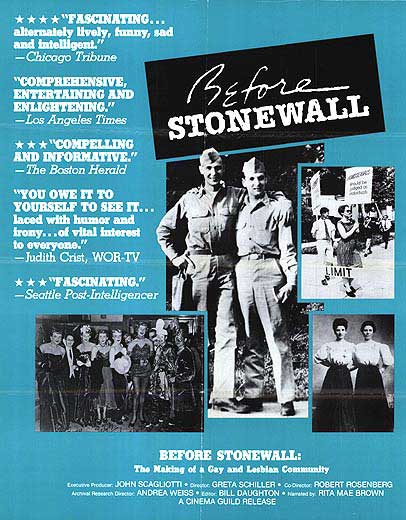 a gay bar in New York City’s Greenwich Village, leading to three nights of rioting by the city’s gay community. With this outpouring of courage and unity the gay liberation movement had begun. BEFORE STONEWALL pries open the closet door, setting free the dramatic story of the sometimes horrifying public and private existences experienced by LGBT Americans since the early 1900’s. Revealing and often humorous, this widely acclaimed film relives the emotionally-charged sparking of the contemporary Lesbian and Gay rights movements, from the events that led to the fevered 1969 riots to many other milestones in the brave fight for acceptance. Experience the fascinating and unforgettable, decade-by-decade history of homosexuality in

America through eye-opening historical footage and amazing interviews with those who lived through an often brutal closeted history. The recently restored version of BEFORE STONEWALL, supervised by Co-director Greta Schiller and underwritten by First Run Features, is being released for a 2019 theatrical run in commemoration of the 50-year anniversary of the Stonewall riots. Co-director Robert Rosenberg joins us to talk about the making of the landmark film and how it helped change perceptions of the LGBTQ community.

For news and updates go to: firstrunfeatures.com/beforestonewall

“You owe it to yourself to see it.” – Judith Crist, WOR-TV