ENDZEIT – EVER AFTER, is a post-apocalyptic feminist gothic fairy tale that takes 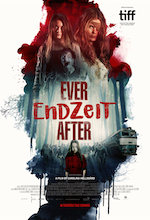 place two years after zombies have overrun Earth. Two young women, Vivi (Gro Swantje Kohlhof) and Eva (Maja Lehrer), develop an unlikely friendship in order to survive. They are stranded in the no-man’s land of the Black Forest where they have to rely on each other and on nature, while in search of a more humane world. But their survival has also unleashed demons from their past that they must confront. In the end, love arises not only for each other, but also for the fantastic natural world surrounding them. According to the director Carolina Hellsgård: “ENDZEIT – EVER AFTER reflects upon our future existence, how we choose to live, and what our options will be in a world where nature strikes  back. The aesthetics are

inspired by the quirky and refreshing style of Olivia Vieweg’s graphic novel, which the script is based on.”

About the filmmaker: Carolina Hellsgård is a writer-director, born in Sweden and based in Berlin. She studied experimental media design at the Berlin University of Arts and film directing and screenwriting at Cal Arts in Los Angeles. Her critically acclaimed debut feature film WANJA premiered at the Berlinale 2015 and was nominated for Berlinale Best First Feature Award. It won Best Screenplay (Valletta Film Festival) and Best Feature Film Debut at the Biberacher Filmfestspiele. She is currently in post-production for the feature film project SUNBURNED.

For news and updates go to: endzeiteverafter.com

For more on upcoming screenings go to: endzeiteverafter.com

** ENDZEIT – EVER AFTER, Director Carolina Hellsgård will be in  Los Angeles on June 28 and 29 for Q&A at the Laemmle Royal and Laemmle Glendale.

“The alternating light and darkness here, and throughout “Ever After,” is a wonderful leitmotif for the women’s labyrinthian path, the journey of heroes.” – Maria Garcia Los Angeles Times

“A post-apocalyptic film, although fictional alludes to the reality we face today as nature begins to wreak its revenge on an out-of-control civilization.” – Louis Proyect Counterpunch.org

“Endzeit has definitely become one of my favorite films of the year, and one of my favorites of the genre. It is a refreshing take on not only these horrific creatures but also the meaning behind them and the apocalypse they bring.” – Stephanie Archer Film Inquiry

“It’s this ecological theme that leads to some truly inspired visuals which sustain the film until its unexpected, conciliatory conclusion. Endzeit is an unbalanced film, to be sure, but proof nonetheless of zombies’ enduring relevance in horror cinema.” – Christopher Machell CineVue