TONI MORRISON: THE PIECES I AM offers an artful and intimate meditation on 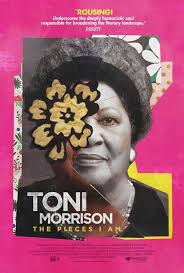 the life and works of the acclaimed novelist. From her childhood in the steel town of Lorain, Ohio to ‘70s-era book tours with Muhammad Ali, from the front lines with Angela Davis to her own riverfront writing room, Toni Morrison leads an assembly of her peers, critics and colleagues on an exploration of race, America, history and the human condition as seen through the prism of her own literature. Woven together with a rich collection of art, history, literature and personality, the film includes discussions about her many critically acclaimed works, including novels “The Bluest Eye,” “Sula” and “Song of Solomon,” her role as an

For news and updates go to: tonimorrisonfilm.com

For more on upcoming screenings go to: tonimorrisonfilm.com/tickets

For more about the filmmaker go to: greenfield-sanders.com

“[An] inspiring doc. An eloquent nonfiction biopic that travels creatively through the past, Timothy Greenfield-Sanders’ film is enlivened both by its own storytelling dexterity and by the participation of its subject, who at 87 years old remains as warm, vibrant and insightful as ever… [She] comes across as a vivacious and intellectually formidable presence deserving of the titanic praise heaped upon by her.” – Nick Schager, Variety

“[A] visually beautiful documentary… Morrison, now 87, narrates her life in a tone that is determined, self-assured and sly… The clarity of her vision as she talks about race may be the most trenchant and potent aspect of the film… Morrison and her novels are treasures.” – Caryn James, The Hollywood Reporter

“What’s most interesting about The Pieces I Am is not just Morrison’s explanations and reflections of her work but her steadfast determination while editing, writing and raising two children on her own, to never indulge the white gaze… A comprehensive examination of Morrison, the perseverance of Black women and how we understand ourselves as a people.” – Aramide Tinubu, Shadow and Act