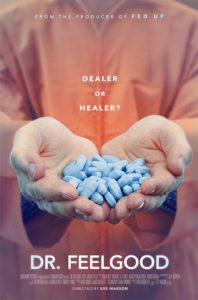 In 2004 Dr. William Hurwitz was convicted of over 50 counts of narcotics distribution and handed a 25-year prison sentence. Eve Marson’s documentary, DR. FEELGOOD, traces Dr. Hurwitz’s trial and eventual appeal, detailing the events that lead to his arrest. Testimonies from the witnesses in Dr. Hurwitz’s case contradict one another – some revere him, while others condemn him. Taken together, their accounts reveal a profile of a compassionate yet flawed doctor. DR. FEELGOOD, in telling his story, underscores the tension between every patient’s right to pain relief and the lawful need for drug control. In 2016, statistics of drug abuse are skyrocketing nationwide and doctors continue to be targeted by the DEA. The federal government recently issued its first national guidelines to control opioid prescriptions. There could not be a more critical time to spark a discussion on this topic and call for careful thought and action.  Director Eve Marson has worked on a wide variety of documentary projects, including television programming for PBS, Discovery Channel and Animal Planet and independent feature films such as Fed Up (released with Radius-TWC May 2014) and Craigslist Joe (released with Gravitas Ventures, August 2012). Marson has also created a large library of nonfiction video work in collaboration with GOOD Inc. and other social-action organizations. evemarson.com. Director / Producer Marson join us for a conversation on her balanced and thought provoking portrait of a doctor who’s life and practice embodies the best and the worst in modern medicine.

For news and updates go to: drfeelgoodfilm.com