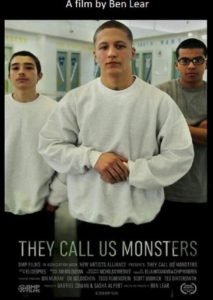 THEY CALL US MONSTERS takes viewers behind the walls of the Compound, the facility where Los Angeles houses its most violent juvenile criminals. To their advocates, they’re kids. To the system, they’re adults. To their victims, they’re monsters. Three such young offenders sign up to take a screenwriting class to write a movie while they await their respective trials: Jarad, who was arrested at 16 and faces 200-years to life for four attempted murders; Juan, who was arrested at 16 and faces 90-to life for first-degree murder; and Antonio, who was arrested at 14 and faces 90-to life for two attempted murders. Halfway through the class, Antonio returns to juvenile court and gets released with time served. Once back in his neighborhood, he quickly falls victim to the same environment and patterns that led to his incarceration in the first place. Meanwhile, the realities of Jarad and Juan’s crimes and pending trials set in.  Ultimately, the film asks how should the system deal with offenders like these young boys. Do they have a capacity to change and return to society one day? Does society have a responsibility to these kids? Or to their victims? Do they deserve a second chance? Director Ben Lear stops by to talk about all of the social, political and cultural issues that have made children “irredeemable” and vilified when it comes to crime and punishment.

For news and updates go to: theycallusmonsters.com