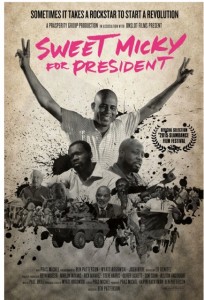 SWEET MICKY FOR PRESIDENT follows Pras Michel, Grammy award-winning rapper and founder of the hip-hop group The Fugees, as he returns to his homeland of Haiti post-earthquake and finds a corrupt government in paralysis. With no experience or money, Pras passionately mobilizes a presidential campaign for the unlikeliest of candidates: Michel Martelly, aka “Sweet Micky”, Haiti’s most popular and most outlandish pop star. The idealistic and politically inexperienced pair set out against a corrupt government, civil unrest, and a fixed election system to change the course of Haitian history. When Pras’ former bandmate — superstar Wyclef Jean — also enters the presidential race, their chances seem further doomed and the story takes on the wild twists of celebrity drama.  Pras Michel acts as masterful storyteller in SWEET MICKY FOR PRESIDENT and Director Ben Patterson brilliantly captures an important part of Haiti’s history as a fledgling democracy struggling to produce a government worthy of the world’s first black republic. Producer Michel and Director Patterson join us to talk about the political, social, personal and cinematic challenges that went into their informative, entertaining and compelling documentary.

For news and updates go to: sweetmickyforpresident.com

“Artfully takes us through a roller coaster ride.” – Indiewire

“It’s an important film and one that acts as a time capsule for future generations.” – FilmPulse

“One of the most unlikely stories ever captured on film.” – Billboard