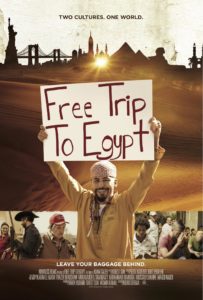 friendship with the very people who fear him. Traveling across the United States to find Americans concerned about an Islamic threat, he makes them an intriguing offer – a free trip to Egypt. With initial reactions ranging from suspicion to hostility, Tarek Mounib embarks on a mission.  Traveling from sunny California to a Trump Rally in Kentucky, from a small town in the heart of Georgia, to Union Square in NYC, they cobble together a diverse group of people – including a school teacher, police officer, Marine Corps veteran, single mom, preacher and beauty pageant queen.  All have preconceptions and misgivings, but are open and courageous enough to embark on the adventure of a lifetime. Arriving in Cairo, the Americans spend 10 days paired with

locals just as diverse as them – and possibly with just as many misconceptions. What happens when a retired teacher and her husband are united with a young Egyptian revolutionary? Or when a Christian missionary and a born-again, former Miss Kentucky are housed with an orthodox Muslim family where the mother wears a burqa? Or when a police officer faces off with a radical, left-leaning journalist? The answers are provocative, surprising, funny,

magical, emotional, revealing, enlightening and ultimately life-changing, in other words, all things human. When people look beyond their ethnicity, political affiliations, religious beliefs, economic status and connect at a human level, it¹s a transformative and universal message for everyone to come together and join the global #PledgeToListen initiative, a social media revolution of acceptance. Director Ingrid Serban and Producer Tarek Mounib talk about the challenges and rewards of working on the revelatory and heartwarming FREE TRIP to EGYPT.

For news and updates go to: FreeTripToEgypt.com

“Gently observing how many of our fellow Americans are full of fear while trying, in its tiny way, to do something about that, Ingrid Serban’s Free Trip to Egypt offers just that to a handful of travelers.”  – John DeFore, Hollywood Reporter