In the Land of Pomegranates is a suspenseful, multi-layered documentary about a 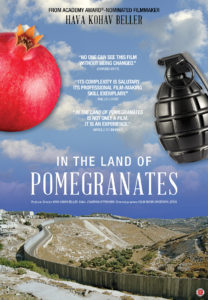 group of young people who were born into a violent and insidious ongoing war. They are young Palestinians and Israelis invited to Germany to join a retreat called ‘Vacation From War’ where they live under the same roof and face each other every day. In these highly charged encounters they confront the entrenched myths and grievances that each side has for the other. As they try to gain insight into the seemingly irreconcilable narratives, the paradoxes and contradictions born of legend and history along with passionately held ideals and the daily fight for survival surface. Interwoven into this intense footage, adding context,

the film also follows other embattled lives in the Occupied Territories and Israel: a mother and her four children living in the shadow of the wall abutting Gaza; an imprisoned Palestinian and the subsequent path he’s taken; an Israeli survivor of a suicide bombing; and a daring Palestinian mother whose son’s life is saved by an Israeli doctor. They are all caught in the duality of the pomegranate: will they embrace rebirth and each other’s humanity, or will they pull the pin on the grenade? We are joined by the Director Hava Kohav Beller (The Restless Conscience: Resistance to Hitler within Germany 1933-1945) for a conversation on what, if any, options may be available to break the cycle of violence and mistrust for people living in a place where hatred and retribution have been normalized.

For news and updates go to: firstrunfeatures.com/landofpomegranates

“The state of affairs in the Middle East may actually be thornier than it seems from afar: that is the position this brave, intimate perspective on the Israeli-Palestinian conflict seems to take.” – MaryAnn Johanson, Flick Philosopher

“Amidst tense airings of grievances, context is set against beautiful images of the disputed homeland, archival footage, and personal testimonials of clashes and cooperation” – Nora Lee Mandel, Film-Forward

“Sobering. A tough and clear-eyed look at how things are, rather than how we want them to be.” –  Ken Jaworowski, The New York Times