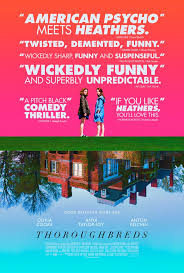 suburban Connecticut after years of growing apart. Lily has turned into a polished, upper-class teenager, with a fancy boarding school on her transcript and a coveted internship on her resume; Amanda has developed a sharp wit and her own particular attitude, but all in the process of becoming a social outcast. Though they initially seem completely at odds, the pair bond over Lily’s contempt for her oppressive stepfather, Mark, and as their friendship grows, they begin to bring out one another’s most destructive tendencies. Their ambitions lead them to hire a local hustler, Tim, and take matters into their own hands to

set their lives straight. From first-time writer-director Cory Finley comes a darkly comic psychological thriller exploring friendship, privilege and morality in a rarefied Connecticut setting of sprawling mansions, equestrian stables and elite private schools. Starring Olivia Cooke (Ready Player One, Me and Earl and the Dying Girl), Anya Taylor-Joy (The Witch, Split) and Anton Yelchin (Green Room), in one of his final screen performances, Thoroughbreds takes its cues from classic film noir, locating a deadpan wickedness in the maneuvers of his dual protagonists Amanda and Lily.  Director and writer Cory Finley joins us to talk about his his background as a playwright, adjusting to life on a film set and working with his stellar cast of young actors.

For news and updates go to: focusfeatures.com/thoroughbreds

“Thoroughbreds was written and directed by first-time filmmaker Cory Finley, and for other amateurs it’s a masterclass in squeezing everything you can out of a small budget.” – Andrew Lapin, NPR

“Thoroughbreds, in other words, has been made with diabolical craft and intelligence, the kind that marks director (Cory) Finley as a major new American talent.” – A.A. Dowd, AV Club

“One of the most assured and impressive American debut movies of the year.” – Oliver Lyttleton, The Playlist