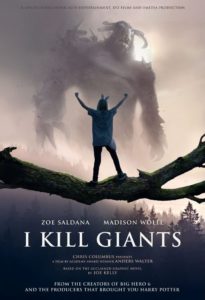 middle-schooler who isn’t afraid of anything. As the only girl in school carrying an ancient Norse warhammer in her purse and killing giants for a living, why wouldn’t she be? I Kill Giants is the sweeping, bittersweet story of a young girl struggling to conquer monsters both real and imagined as her world crumbles at the feet of giants bigger than any one child can handle. Based on the best-selling graphic novel by Joe

For news and updates go to: xyzfilms/i-kill-giants

“This intimate story about a troubled 12-year-old who’s on a mission to save her town is virtually tone perfect.” – Jeanette Catsoulis, New York Times

“The vivid cinematography, affecting performance by Wolfe, and lack of saccharine allow the film to resonate not only with the teen target demographic but older viewers as well.” – James Beradinelli, ReelReviews

“I Kill Giants is a dark piece of work for children, which is far from a bad thing.” – Ann Storm, Film Journal International

“Like its heroine, I Kill Giants isn’t afraid to tackle the darkness or rage of little girls, or their fear and pain.” – Katie Walsh, Los Angeles Times