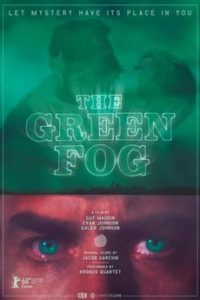 feels through the medium of cinema   Composed by Jacob Garchik and performed by Kronos Quartet, the film’s score nods to Bernard Hermann’s classic VERTIGO music as it collides and converses with Maddin and Johnsons’ irreverent and loving footage to create a distinctive musical extravaganza. Through 12 features and many shorts, adventurous artist Guy Maddin exhibits the rare ability to simultaneously subvert and honor the craft of  filmmaking. His credits include the Emmy Award-winning ballet film Dracula: Pages From A Virgin’s Diary (2002); The Saddest Music in the World (2003); My Winnepeg (2007) and US National Society of Film Critics Best Experimental Film Prize-winners Archangel  (1990) and The Heart of the World (2000). Guy Maddin talks about the “City by the Bay,” scriptwriting, storytelling and his favorite film, Vertigo.

For news and updates go to: balconyfilm.com/the-green-fog

“First and foremost, “The Green Fog” is a marvel of film scholarship that looks backward and forward from the Hitchcock masterpiece.” – Ben Kenigsberg, New York Times

“The Green Fog fairly closely follows the structure of Hitchcock’s film; achieving that in itself is some sort of accomplishment. However, it’s not so much an assemblage as it is a conjuring.” – Bilge Ebiri, Village Voice

“The film is a brilliant exercise in meta-narrative, which raises questions galore about reality and representation, time and space, genre and gender, individual and urban identity, cinematic suture and casting. Mainly, though, it’s just very, very funny.” – Geoff Andrew, Sight and Sound

“The work of a sensibility as impish as it is scholarly, animated by a mischievous sense of the medium’s possibilities” – Justin Change, Los Angeles Times

“It demonstrates the act of creation as a perpetually reconstructive effort…” – Lawrence Garcia, Cinema Scope