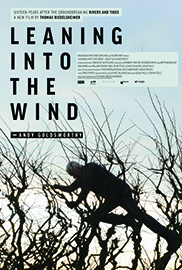 to work with renown artist Andy Goldsworthy. LEANING INTO THE WIND—ANDY GOLDSWORTHY, The film follows Andy on his exploration of the layers of his world and the impact of the years on himself and his art. As Goldsworthy introduces his own body into the work it becomes at the same time even more fragile and personal and also sterner and tougher, incorporating massive machinery and crews on his bigger projects. LEANING INTO THE WIND subject Andy Goldsworthy makes works of art using the materials and conditions that he encounters wherever he is. Using earth, rocks, leaves, ice, snow, rain, or sunlight, the resulting artworks exist briefly before they are altered and erased by natural processes. He also uses his own body as a medium, as with his Rain Shadows,

or through actions such as spitting, throwing, climbing and walking. He has undertaken commissions in the Queensland rainforest, Australia and the New Zealand coast; in Rio de Janeiro, New York City, St Louis, Montreal and San Francisco; in the New Mexico desert, the mountains of central Spain and Haute-Provence, France, and the fells of Cumbria and Dumfriesshire. Goldsworthy has published many books throughout his career, beginning with Rain, sun, snow, mist, calm: Photoworks (1985). Director Thomas Reidelsheimer joins us for a conversation on what inspires Andy Goldsworthy to make his art, what attracts him to the work and why did he return to work with the Andy Goldsworthy 16 years after their first collaboration, Rivers and Tides.

For news and updates go to: leaningintothewindfilm.com

“A nonfiction-focused director and cinematographer frequently attracted to the intersection between artistic expression, nature, and spirituality (however unarticulated), Riedelsheimer is well-matched to Goldsworthy’s methods and interests.” – Dennis Harvey, Variety

“There are moments where you may want to stop the film to assure yourself you’re seeing what you’re seeing, so disordering to the senses are Goldsworthy’s re-orderings of nature.” – Ty Burr, Boston Globe

“Leaning Into the Wind” offers viewers a welcome chance to consider the work of an artist who defies the recent commodification cult to embrace the ephemeral and the nominally “worthless.” – Ann Hornaday, Washington Post
“Even if some things have changed, spending time with an artist who’s concerned, as he’s said in interviews, with “the permanence of temporary objects and the temporality of permanent objects,” is always worth the journey.’ – Kenneth Turan, Los Angeles Times