In the new film GO BACK TO CHINA we meet Sasha Li (Anna Akana). To say that Sasha is spoiled would be an understatement. She’s entitled and self 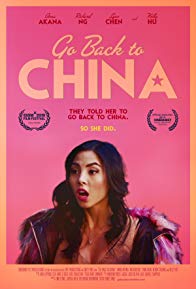 centered. But unlike many of her peers, she doesn’t have to struggle financially. Her father, (Richard Ng) a toy tycoon in China, has given her a million dollar trust fund. But instead of investing in her future, she has blown through half of it already on designer duds and bottle services. When she calls her father to complain, she finds out that he has blocked all her accounts and is cutting her off. She’s given an ultimatum. She can either go back to China and work for the family business, or she’s cut off forever. Teddy Li, the patriarch of the family, is not exactly father of the year. Divorced

three times (all due to infidelity) and father of four. But with Sasha’s arrival, they all have to figure out a way to co-exist as a family for the first time. Once Sasha starts working at the factory, she also gets a much needed dose of reality check. When she makes a huge mistake that threatens the workers’ livelihood, it’s on Sasha to decide what she’s willing to sacrifice, in order to do the right thing. GO BACK TO CHINA is a heartfelt and bittersweet family portrait that offers an honest look at the human cost of things that are made in China. Director Emily Ting (Already Tomorrow in Hong Kong) joins us to talk about her fish-out-of-water dramedy, and a talented cast of artists.

For news and updates go to: gobacktochinafilm.com

“A funny, light, and heartfelt situation comedy…thanks in part to its likable lead whose adventures to find herself don’t involve meeting a man of her dreams but rather landing a dream job after learning the value of hard work.” – John Fink, The Film Stage

“Smartly written, funny and wonderfully acted blend of comedy and drama. Its themes of family conflict, the clash of cultures and finding your true calling are framed within a likable, entertaining narrative which will surely find its audience.” – Rouven Linnarz, Asian Movie Pulse

“Anna Akana and Lynn Chen manufacture joy in ‘Go Back to China.’ [It] is funny enough to draw in an audience and smart enough to teach them something while they’re there.” – Brooke Sjoberg, The Daily Texan

“Emily Ting is a needed voice in cinema because she displays life in a way that you won’t see anywhere else. It’s real, raw, and relevant” – Carla Renata, The Curvy Film Critic