HARVEST SEASON delves into the lives of people who work behind the scenes of the premium California wine industry, during one of the most 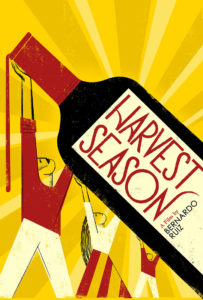 dramatic grape harvests in recent memory. The film follows the stories of Mexican-American winemakers and migrant workers who are essential to the wine business, yet are rarely recognized for their contributions. Their stories unfold as wildfires ignite in Napa and Sonoma counties, threatening the livelihoods of small farmers and winemakers who are already grappling with a growing labor shortage, shifting immigration policies, and the impacts of a rapidly changing climate. Director Bernardo Ruiz is a two-time Emmy® nominated documentary filmmaker and member of the Academy. He was born in Guanajuato, Mexico and grew up in Brooklyn, New York. His directorial feature debut, Reportero, about attacks on the press in Mexico. New York Magazine called it “a powerful reminder of how journalism often requires immense amounts of physical and

psychological bravery.” His second feature documentary, Kingdom of Shadows premiered at SXSW in the U.S. and IDFA in Europe. “Many documentaries have chronicled the drug war in the U.S. and Mexico,” writes Slackerwood of the film, “but few have humanized it as poignantly as Kingdom of Shadows. [It] is more observant than crusading…rooted in first-rate journalism.” The New York Times called it “unforgettable.” With the release of his third film HARVEST SEASON Director Bernardo Ruiz joins us to talk about his intimate look at the lives of veteran winemaker Gustavo Brambila, Mexican migrant worker René Reyes, and wine entrepreneur Vanessa Robledo.

For news and updates go to: harvestseasonmovie.com

*** Monday May 13th at 10:00PM to watch HARVEST SEASON on PBS’s Independent Lens

More about the the director go to: bernardoruiz.com

“Ruiz’s film making transforms the Napa and Sonoma Valleys into a stage for much larger stories about migration, politics and the American Dream.” – Arturo Conde, NBC Latino

“Told expertly and with some startlingly gorgeous photography, director Bernardo Ruiz gives a first hand account of small wine producers and the struggles they face both economically and politically in 2018 America… a film that’s as beautiful as it is intimate and emotionally moving.” – Joshua Brunsting, Criterion Cast

“Rising above all the other similar films on wine, Harvest Season shines by focusing on all the people involved in making the wine and not just the people at the top.” – Steve Kopian, Unseen Films

“A beautifully filmed documentary that is part wine story and part immigrant/migrant story…a loving portrait of the ups and downs of life in the vineyard and those who put their backs as well as their heart and soul into it.” – Winston Salem Journal