Academy Award-winning Passion Pictures and HHMI Tangled Bank Studios present one of the most important but untold science stories of our time, THE SERENGETI 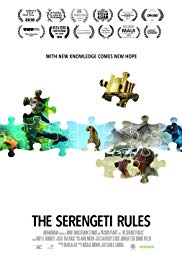 RULES  is a tale with profound implications for the fate of life on our planet. Beginning in the 1960s, a small band of young scientists, Bob Paine, Tony Sinclair, Mary E. Power, John Terborgh, Jim Estes, and Sean B. Carroll headed out into the wilderness, driven by an insatiable curiosity about how nature works. Immersed in some of the most remote and spectacular places on Earth—from the majestic Serengeti to the Amazon jungle; from the Arctic Ocean to Pacific tide pools—they discovered a single set of rules that

govern all life. Now in the twilight of their eminent careers, these five unsung heroes of modern ecology share the stories of their adventures, reveal how their pioneering work flipped our view of nature on its head, and give us a chance to

reimagine the world as it could and should be. Director Nicolas Brown joins us to talk about the far-reaching implications of the groundbreaking work done by Bob Paine on the importance of “keystone” species and the tremendously important work done by his colleagues since then can lead to a restoration of the natural order and help humanity reverse an ecological catastrophe.

For news and updates go to: theserengetirules.com

** THE SERENGETI RULES – Dr. Jim Estes, Professor of Ecology and Evolutionary Biology, UCSC and subject of the film with Dr John Terborgh, Professor of Environmental Sciences, Duke University also subject of the film will participate in a Q&A moderated by David Guy Elisco, Executive Producer, HHMI Tangled Bank Studios following the 7:50 pm show on Friday, 5/17 at the Monica Film Center.

“‘The Serengeti Rules’ celebrates not only the diversity and beauty of the natural world but also recognizes the transformative power of curiosity and knowledge.” – Kimber Myers, Los Angeles Times

“An absolutely riveting documentary about biodiversity and the need for humanity–its gravest threat–to reverse its course and preserve it. Difficult under the likes of Trump and the Koch’s but necessary.” Louis Proyect, counterpunch.com

“The great accomplishment of “The Serengeti Rules” is that it directs the viewer to see beauty in the way an ecologist might.” – Two Bugbee, New York Times

“It’s a film which sounds an alarm, but, unlike most similarly-themed pictures, one which permits a chink of light into the traditionally bleak narrative of man’s impact on the land.” – Wendy Ide, Screen International