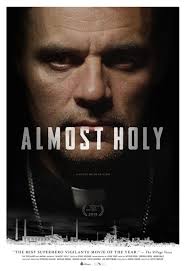 ALMOST HOLY follows Pastor Gennadiy Mokhnenko as he attempts to rescue homeless and drug-addicted Ukrainian youth, utilizing highly controversial “tough love” methods in which he forcibly abducts street kids.  A powerful portrait of a unorthodox folk hero, the film serves as a eye-opening look into Ukraine’s rapidly evolving social and political reality. The critically acclaimed sophomore feature documentary from director Steve Hoover (Sundance Grand Jury and Audience Award winner Blood Brother) is executive produced by Terrence Malick and features a score by Atticus Ross (Gone Girl, The Social Network). The film premiered at the 2015 Tribeca Film Festival. Director Steve Hoover stops by to talk about a courageous man on a crusade to impact the live and the surroundings of the most vulnerable.

For news and updates go to: almostholyfilm.com

Almost Holy opens May 20th at the Los Angeles – Sundance Sunset 5
Q&A with the subject, Gennadiy Mokhnenko, following the 7:00pm screening on Friday and Saturday.

“Almost Holy” captures something meaningfully urgent in the brutal day-to-day of tough love amid a world of tougher indifference. – LA Times

Almost Holy has the feel of following an embedded journalist on one of those raw, ground-level views of a problem you’d never considered before but now, by virtue of good reporting, feels urgent and alive. – Village Voice

There have been numerous criticisms of Mokhnenko’s tactics over the years… But one has to wonder: if Hoover’s side shows a man striving to ensure that children no longer die in the streets from drug addiction, who’s on the other side? – IndieWire