The searing new documentary from Almudena Carracedo and Robert Bahar, THE SILENCE OF OTHERS asks the question, “What if in the ‘60s you were 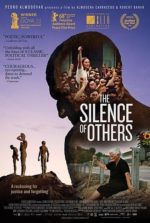 sadistically tortured for your political beliefs – and the man responsible (Antonio González Pacheco, aka “Billy the Kid”) is now your neighbor?” The bloody Spanish Civil War (1936-39) was followed by the Generalissimo Francisco Franco dictatorship that ended only with his death in 1975 – after which a law granted amnesty for crimes committed throughout this period. THE SILENCE OF OTHERS tackles the legal/political questions that this enforced obliviousness has created, and equally compelling, the existential conundrum of living in a nation in which no one has been charged with the murder of hundreds of thousands, buried in more than 2000 mass graves. A

new movement in Spain confronts these hard truths. With the rise of authoritarian regimes around the world – and with human rights abuses being committed on our own border – this film could not be more timely. THE SILENCE OF OTHERS won Best Documentary at the Goya Awards (Spain’s Oscar equivalent), as well as more than 30 honors from international festivals (Berlinale, IDFA, Sheffield, etc.) and was among the films shortlisted for the 2019 Best Documentary Oscar. The film has become a phenomenon in Spain, where more than a million people have seen it. Co-directors Almudena Carracedo and Robert Bahar join us for a conversation on the decades long search for justice by the families and the victims and why it matters.

For news and updates go to: thesilenceofothers.com

“An elegant reckoning. Clear-sighted and approachable… with all the force of a classic political thriller by Costa-Gavras or Francesco Rosi.” – Allan Hunter, Screen International

“An extraordinary cry against the thieves of memory. The most necessary documentaryof the last 80 years [in Spain]” – Fotogramas

“A wrenching and prescient documentary. We can only hope it is seen by those who don’t want to talk about historic memory.” – Cinemanía