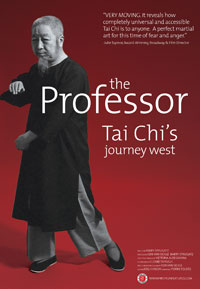 THE PROFESSOR is the first major feature documentary about the martial art of Tai Chi and one of its greatest masters, Cheng Man-Ching, the man who brought the Chinese practice to the U.S. during the turbulent 1960s. Professor Cheng Man-Ching (1901-1975) is considered one of the greatest Tai Chi masters of modern times. Strugatz’s documentary tells the story of the man who overcame cultural divides to bring ancient traditions to the Western world, in the process teaching Westerners how to seek an ethical, open-minded and joyful way of life with Tai Chi – not only as a martial art, but also as a spiritual practice and form of mindful exercise. Part of a centuries-old Chinese lineage, Tai Chi is an ancient form of exercise originally created as a fighting art. Known as the “Supreme Ultimate” martial art, it is deeply rooted in classic Chinese culture and philosophy, combining mental concentration with slow, controlled movements to focus the mind, challenge the body, and improve the flow of ”chi” – the life energy thought to sustain health and quiet the mind.  Filmmaker Barry Strugatz, a student of Tai Chi, became aware that the legacy of Cheng Man-Ching as a transformational figure was in danger of being lost. Strugatz has written screenplays for Jonathan Demme (Married to the Mob), Meryl Streep (She-Devil) and directed Melissa Leo in From Other Worlds. THE PROFESSOR is his first documentary. He joins us to talk about how Cheng Man-Ching impacted the physical, psychological and spiritual lives of countless lives.

For news and updates go to:firstrunfeatures.com/professor.html

Director Barry Strugatz will participate in a Q & A after the 7:40 PM screenings at the Music Hall on Friday and Saturday, May 6 and 7.

“Forms a sort of oral history of Cheng and his methods… The documentary succeeds in highlighting Cheng’s importance, not in making tai chi relevant to a wider audience.” – Daniel Eagan, Film Journal International

“For those of us who study these arts and are certainly familiar with Professor Cheng Man-Ching the chance to see any footage of him in action at all is a real treat. Excellent.” – Steven Ruskin, AV Maniacs

“Sweet… it’s refreshing to watch a film about a man who has helped so many individuals grow.”  - Ross Anthony, Hollywood Report Card

“VERY MOVING. It reveals how completely universal and accessible Tai Chi is to anyone. A perfect martial art for this time of fear and anger.” – Julie Taymor, Award-Winning Broadway & Film Director