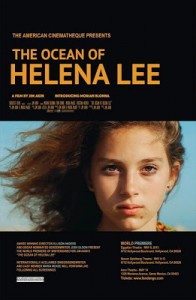 Twelve-year-old Helena Lee (debut performance by Moriah Blonna) sleeps in the sandy closet of a one room apartment in an unkempt corner of California’s Venice Beach. Her father, charismatic surf-rat Mickey (Tom Dunne), spurs her journey as an aspiring writer with his iconoclastic absurdist view of the world. Helena conducts a season to season pilgrimage in and around the carnival of beach life; observing the bohemian locals, the hopeful tourists, the lost and forgotten who have reached the end of the map. Helena’s observations lead to an introspective spiritual and intellectual wanderlust often leaving her standing at the water’s edge, facing the void, a head and heart full of unanswerable questions; how shall I to live? why did my mother die? At the cusp of adolescence, her view of what it means to become a woman is torn between the opposing influences of the free spirited strippers who flock around Mickey and the sacred memory of her mother Luisa (singer/songwriter, Maria McKee). Forever preserved in Helena’s wakeful dream, the vision of her mother is a saintly protector who haunts with calming advice and compassionate lullabies.  As winter approaches and the sea and sky begin to darken, Helena’s quest to find her identity is hastened and forever impacted by a life-altering event. Director and writer Jim Akin will join us to talk about the raw emotional impact of his compelling new film.

For news and updates go to: theoceanofhelenalee.com

“(Akin) manages to fuse what he’s learned from a diverse band of European and American filmmakers with those impulses to create something that feels new, freshly imagined. One can discern the spirit of Kings of the Road-era Wim Wenders flitting around the edges of TOOHL, as well as Fellini’s affinity for unusual human and environmental beauty, and the movie is attuned to Helena’s inner spirit in such a way that it feels at times like a Dardennes Brothers joint on rollerblades, gliding effortlessly down the boardwalk to the beach-friendly strains of Mckee and Akin’s propulsive pop score.” – Dennis Cozzalio, Trailers from Hell

“Jim Akin’s work is personal. His care and affection for his topics (and the images he chooses) is apparent in every frame. He really looks at things, he really sees. After the Triumph of Your Birth took place in the industrial wasteland sections of Los Angeles, the drying-up canal, the old warehouses, the blasted-by-sunlight empty factories. It is part of a California rarely seen in film. And so, too, his vision here. Venice Beach has its own character, its own vibe, and Akin captures it, in its loneliness and isolation, in its beauty and its sleaze, and also in its cacophony of community and expressiveness.” – The Sheila Variations