Black babies don’t come from white people. Except this one just did. That’s what Jen (Sarah Butler) tells her husband Tom (Will McFadden). He says he believes 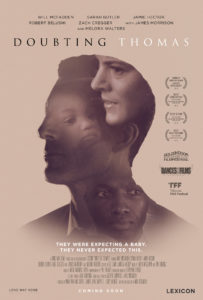 her. But soon, amidst a constant barrage of questions from everyone, Tom’s doubts and worst fears take hold. Both new parents are scared by the thoughts entering their minds, and scared to share them with each other. Baby Liam seems to love their dear friend Ron (Jamie Hector) – but why does that make it harder for Tom? And why do people keep confusing Ron for Liam’s father? Maybe because they’re both black. By the time a twist is revealed that could explain the baby’s appearance, it may be too late. Before Tom and Jen can accept their child, they’ll have to accept themselves… or face living their lives apart. Starring Will McFadden, Sarah Butler, Jamie Hector, Rob Belushi, Zach Cregger,  James Morrison,  and Melora Walters.

Doubting Thomas, winner of Best Screenplay, Best Actor, Audience Award, Best First Feature, will begin its theatrical run in Los Angeles on Friday, October 11th, ahead of its North American VOD / Digital release on October 15th, 2019 through  Gravitas Ventures.  Will McFadden’s  directorial debut, DOUBTING THOMAS brings unconscious racism home in the innocence of a baby. A complex tale that  touches on institutional    racism and assumed privilege, the concept for the film was born from the true story of a black man killed in police custody in a racially charged incident. That man’s son, Joseph Campbell, shares story by credit with McFadden.  Director / Co-writer / Producer and Lead Actor Will McFadden joins us to talk about his thought provoking drama that raises a multitude of questions about the relevance of family history, trust and race.

For news, screenings and updates go to: doubtingthomasmovie.com

“ONE OF THE BEST WRITTEN MOMENTS OF ANY MOVIE ALL YEAR, WHAT IT SAYS ABOUT RACE, PERCEPTION, AND YOUR TRUE SELF IS SINCERE. 10 OUT OF 10.” – Bobby LePire, Film Threat

“DOUBTING THOMAS IS STELLAR IN ALL ASPECTS THANKS TO THE VISION OF HELMER WILL MCFADDEN AND HIS CAST – BRAVO.” – Jason Coleman, Whysoblu