Inspired by Lewis Hyde’s beloved classic The Gift: Creativity and the Artist 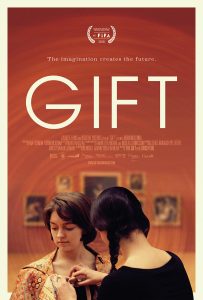 in the Modern World, GIFT is a richly cinematic film, interweaving character‐driven stories. On North America’s Pacific Northwest Coast, a young Indigenous artist and carver undertakes the elaborate preparations for a potlatch – to make a name for himself by giving everything away. In Rome, Italy, a factory occupied by migrant families is transformed into a living museum, protected by a barricade of art : a model of resistance, and an invaluable gift.  In the pirate utopia of Burning Man, a mutant bumblebee art car distributes honey in a post-­apocalyptic desert landscape. Meanwhile, in Auckland, New Zealand, artist Lee Mingwei prepares to launch Sonic Blossom – a “transformative gift” of song. GIFT is a tribute to something that can’t be measured or counted, bought or sold. Exploring the parallels between artists’ work and a gift economy, it’s a reflection on the creative process, the reasons we “labour in service of our gifts”, and a celebration of the imagination. Director Robin McKenna joins us to talk about her beautifully meditative film about paying forward human connection and how communities can re-imagine the meaning of wealth and prosperity.

About the filmmaker: Robin McKenna is director, producer and writer of GIFT, a feature-length documentary and crossmedia project inspired by Lewis Hyde’s classic bestseller The Gift. She is currently making Thanadoula, a short animated documentary fairytale about a real-life “death doula”, in co-production with the National Film Board of

Canada – and Medicine, a feature-length documentary over a decade in the making, about ayahuasca, medicine and healing, with Dr. Gabor Maté. She directed Genevieve Bujold: ArtVie, a short film tribute to Bujold on 16mm, for the Governor General’s Awards for the Performing Arts in 2018. Robin grew up in Montréal, and began making films with La course destination monde. Her cinematography credits include City of Borders (Berlinale, Hot Docs 2009) and The Take with Naomi Klein and Avi Lewis (AFI Best Documentary 2004).

For news, updates and screenings go to: giftitforwardproject.com/the-film

GIFT opens at the Laemmle Monica Film Center on Friday, October 11. On Saturday, October 12 John Densmore (The Doors) and director Robin McKenna will participate in a Q&A following the 7:45 pm show.

“For many people, Gift will live up to its title.” – Frank Scheck, Hollywood Reporter

“Documentarian Robin McKenna’s intelligent and life affirming documentary Gift will make viewers consider how they give, receive, and create art in a fresh, new light.” – Andrew Parker, The Gate

“A documentary showing how art keeps moving in circles of sharing, giving, and generosity.” – Frederic and Mary Ann Brussat, Spirituality and Practice