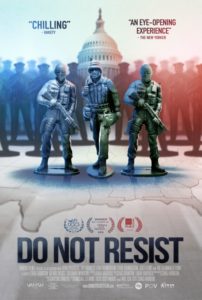 DO NOT RESIST is an urgent and powerful exploration of the rapid militarization of our police force in the United States.  The Tribeca Film Festival BEST DOCUMENTARY WINNER puts viewers in the center of the action – Starting on the streets of Ferguson, Missouri, as the community grapples with the death of Michael Brown; to the all too familiar sight of law enforcement in full riot gear and armored tanks driving through peaceful protests;  to a ride-along with a South Carolina SWAT team; to a front row seat inside a police training seminar that teaches the importance of “righteous violence”; to the floor of a congressional hearing on the proliferation of military equipment in small-town police departments – before exploring where technology could lead the field next. DO NOT RESIST offers an unflinching look at the current state of law enforcement in America and a glimpse into the future. Director Craig Atkinson joins us to talk about a documentary film that is literally ripped from today’s headlines painting a startling picture of the direction our local law enforcement are headed.

For news and updates go to:donotresistfilm.com

“DO NOT RESIST allows us to see our present moment for the science-fiction dystopia it has become.”  – Red Carpet Crash

“An eye-opening experience…” – The New York