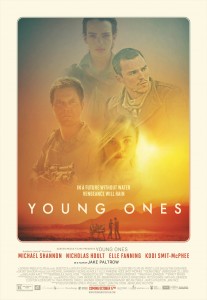 Set in a near future when water has become the most precious and dwindling resource on the planet, one that dictates everything from the macro of political policy to the detailed micro of interpersonal family and romantic relationships. The land has withered into something wretched. The dust has settled on a lonely, barren planet. The hardened survivors of the loss of Earth’s precious resources scrape and struggle. Ernest Holm (Michael Shannon) lives on this harsh frontier with his children, Jerome (Kodi Smit-McPhee) and Mary (Elle Fanning). He defends his farm from bandits, works the supply routes, and hopes to rejuvenate the soil. But Mary’s boyfriend, Flem Lever (Nicholas Hoult), has grander designs. He wants Ernest’s land for himself, and will go to any length to get it. Director Jake Paltrow joins us for a conversation on his making of a sci-fi western and the challenges of working in South Africa and a bug-like robotic cargo carrier.

For news and updates on Young Ones go to: screenmedia.net/project/young-ones

“Perhaps most fascinating about the movie is its three-tiered baton pass from protagonist to protagonist (all of them types of different patriarchs). Exploring themes of blame, sin, guilt, lies and violence, as the title suggests, “Young Ones” tackles notions of what our kin inherit, and the baggage passed down from generation to generation. Thoughtful and well-considered, Paltrow’s film is most effective when meditating on these textures, that take on the look and feel of Greek tragedy.” – Rodrigo Perez, The Playlist

“It avoids the typical trappings of the genre pastiche by utilizing its clear indebtedness to numerous other films as merely a starting point, rather than an end.” – Clayton Dillard, Slant Magazine