In Alexis Michalik’s rousing, re-telling of the story about France’s enduring and iconic dramatist Edmond Rostand is not yet thirty, but he already has two children and a 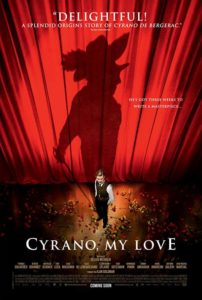 lot of anxieties. He hasn’t written anything for two years. In desperation, he offers the great Constant Coquelin a new play, a heroic comedy, written in verse for the holidays. There is just one problem: the play hasn’t been written yet. Ignoring the whims of the actresses, the demands of his Corsican producers, his wife’s jealousy, his best friend’s relationship problems and the lack of enthusiasm of all those around him, Edmond begins to write the play that nobody believes in. For the time being, he only has the title: ‘Cyrano de Bergerac’ Director Alexis Michalik joins us o talk about the recasting of this timeless tale as a peak behind the curtain of a failing playwright’s topsy-turvy effort to bring his tale of unrequited love to life and how his own attempts to bring Edward Rostand’s story to the screen eerily mirrored Cyrano’s author Edward Rostand.

Director’s Statement: Cyrano, My Love is a project that I have had in mind for more than fifteen years. I first came up with the idea for it in 1999 when I saw Shakespeare in Love at the cinema. In this film, Joe Madden, based on real facts, recounted how Shakespeare found inspiration and wrote his greatest masterpiece, Romeo and Juliette, inspired by a beautiful muse despite being crippled by debt. I then asked myself why we had never made a similar film in France. A few years later I came across an information booklet which explained the

circumstances surrounding the ‘première’ of Cyrano. I said to myself that it was unbelievable that nobody had ever thought to tell the greatest ‘success story’ of French theater. I realized that the author, Edmond Rostand was just 29 years old when he wrote it. He wrote such a masterpiece before even turning 30! I was astounded! I began to make notes and I went to see Alain Goldman, who encouraged me to write a script. It was around six years ago, and I was only 30 years old. We faced a great deal of struggles, as we couldn’t get financial backing for the film, which was deemed too costly. I was about to give up, when I went to London. And there, incredibly, among the many shows performed there was the theatrical adaptation of Shakespeare in Love! The play was marvelous, and so well received, and this gave me the idea to take up my Cyrano, My Love again, rewrite it for the theater and present it to Alain Goldman. Because the plays Le Porteur d’histoire and Le Cercle des illusionnistes had done quite well, they gave me the go ahead. Despite Cyrano, My Love requiring a significant number of comedians, the Palais Royal theater agreed to host it. The play was so successful that we soon found the budget that we needed to finance the film. – Alexis Michalik

For news, updates and screenings go to roadsideattractions.com/cyranomylove

Cyrano, My Love opens on October 18 at the Laemmel Royal Theatre in Los Angeles

“… Michalik’s Cyrano, My Love is full of rapid-fire dialogue, engaging performances, and sublime direction, all of which capture the energy of a play on celluloid.” – Douglas Davidson, Elements of Madness

“A film that is completely different, a completely distinct proposal, that also ended up sculpting a respect and a love for the theater.” – Erick Estrada, Cinegarage

“A whimsical, charming and amusing antidote for all of the heavy, downbeat awards films.” – Avi Offer, NYC Movie Guru