In this brilliant followup to his award-winning documentaries (SENNA, AMY) DIEGO MARADONA captures the athletic brilliance and maddening duality of a soccer player 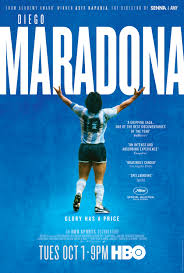 widely considered to be best player in the world from the moment he burst onto the scene in his native Argentina. And yet success proved elusive. He failed at Barcelona. He was considered a problem player, too interested in partying. Meanwhile, having never won a major tournament, the ailing Italian football giant SSC Napoli were perennial underachievers. Their fanatical support was unequalled in both passion and size. But how they ached for success… On 5th July 1984, Diego Maradona arrived in Naples for a world-record fee and for seven years all hell broke loose. The world’s most celebrated football genius and the most passionate but dangerous city in Europe were a perfect match for each other. Diego Maradona was blessed on the field and treated like a God off it; the charismatic Argentine loved a fight against the odds and led Naples to their first-ever League title. It was the stuff of dreams. But there was a price… Diego could do as he pleased while performing miracles on the pitch, but as time passed, darker days closed in. Italy turned on him.

The third film from the Academy Award-winning & multi-BAFTA-winning team behind SENNA and AMY (director Asif Kapadia, producer James Gay-Rees, editor Chris King, composer Antonio Pinto), and also Paul Martin, DIEGO MARADONA was constructed from over 500 hours of never-before-seen footage from Maradona’s personal archive. DIEGO MARADONA is crafted in the style of SENNA and AMY. It is the definitive feature

documentary on the charismatic enigma that is Maradona. In a city where even the devil would need bodyguards, Diego Maradona became a god. Maradona in Naples is the story of his life, the wild and unforgettable story of an unrivalled talent. He was a rebel, cheat, hero and god. This is a story of glory, despair and betrayal, a tale of corruption and, ultimately, of redemption. Director / Producer Asif Kapadia joins us to talk about the enigma of “Diego” and “Maradona.”

For news, updates and screenings go to: diegomaradona.movie

“MESMERIZING… one of the most colorful and fascinating personalities in all of sports, with a life story bordering on the mythic. You may know outlines of the soccer legend’s life, but there’s no way you won’t learn something from DIEGO MARADONA, Asif Kapadia’s absorbing and exhaustive new film.” – Jocelyn Noveck, Associated Press

“a fame-technique movie, measured in crowd roars, off-field revelry, media run-ins, and fan scrums as dizzying accoutrements to success, but also – when Maradona succumbed to scandals surrounding women, an unclaimed son from an affair, cocaine, loyalty, and powerful mob friends – in how those same trappings can suddenly turn vicious, and a hero’s fall can go shockingly unsupported.” – Robert Abele, Los Angeles Times

“[Kapadia] has edited cruddy video footage (some of which appears barely more than camcorder-grade) and photographs into a movie so fluid that it moves like a Hollywood production. He also dispenses with much of the filler common to documentaries… It is exhausting and exhilarating, cheap looking and slick, a documentary for Maradona fans but also for many others besides.” – Ben Kenigsberg, The New York Times

“Asif Kapadia has put together an extraordinarily intimate account of [Diego Maradona’s] rise and fall, enriched by grainy but graphic footage recording every phase of his life.” – Sandra Hall, Sydney Morning Herald