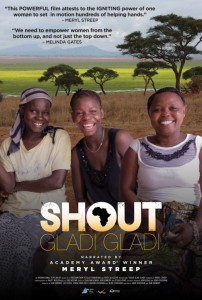 Narrated by Academy Award® winning actress Meryl Streep, SHOUT GLADI GLADI celebrates the extraordinary people who rescue African women and girls from obstetric fistula, a medical condition that can turn them into reviled outcasts. Co-directed by Adam Friedman and Iain Kennedy, and filmed in Malawi and Sierra Leone, the film spotlights the quest of Ann Gloag, the indefatigable philanthropist and former nurse who drives the movement to save these vulnerable women, and presents the patients as they tell stirring tales of their struggles and triumphs. Everything culminates with the exuberant Gladi Gladi ceremony, a singing and dancing blowout that marks the day the women return home cured. Obstetric fistula is not a disease—it is a condition caused by prolonged, obstructed childbirth. It is most prevalent in young girls like Carolynne Nikomo, who was afflicted at 12, but it has been pandemic for so long that Vanesia Laiti, a woman in her 70s, lived with it for 40 years before she recently received treatment. Some of these women’s stories have happy endings, like Carolynne, who is able to have another child, but many are not able to be fully cured, or at least not immediately. Still, all the patients encounter doctors, nurses and midwives who work around the clock to help them. For women who have been shunned by their husbands and families, this is truly life-changing. Co-director Friedman joins us for a conversation on the challenges and rewards of taking on a project where women are often threatened and reviled for a medical condition that occurs during childbirth.

For news and updates go to: shoutgladigladi.com